I bought this car in July of this year. I knew of its brake problem when I bought it. The rear brakes would seize occasionally and the wheels would seriously drag. I first rebuilt all four brake calipers and replaced the soft brake lines with stainless steel ones. The problem not only persisted but proved worse. The rear wheels are totally locked by the rear calipers. With the bleeder valves open, the rear wheels move perfectly – no drag. With the bleeder valves tightened, one press of the brake pedal locks the rear brakes totally. I’m new to this and it’s totally incomprehensible that I did something wrong. As such, I looked for problems up stream from the caliper. I started tracing the problem back by each brake line junction. Loosening the junctions would release the rear brakes every time. The master cylinder was my next target. Brake master cylinders are basically two pistons inside of a cylinder that control the flow to and from the front and rear brakes. A rare problem can occur where the master cylinder piston that allows flow to and from the rear brakes gets stuck and maintains pressure in the lines, even with no pressure on the pedal. I replaced the master cylinder, rebled the brakes, and tested the rear brakes again. No luck! No. It was me to blame. The tutorial I originally followed to rebuild the calipers only showed the front brakes. Rear caliper pistons must be compressed WHILE TURNING clockwise. I used a hammer to overcome the resistance. It seemed like a suspect way of doing things at the time but I was eager to finish. Lesson learned, Car.

There is a fuel leak. A cd-sized pool of fuel is left on the ground after ten minutes or so of idling. The pool is located inside of the right rear tire. Fuel cascades down the pipe with the evap canister shown in the diagram below. I have not yet diagnosed the problem. 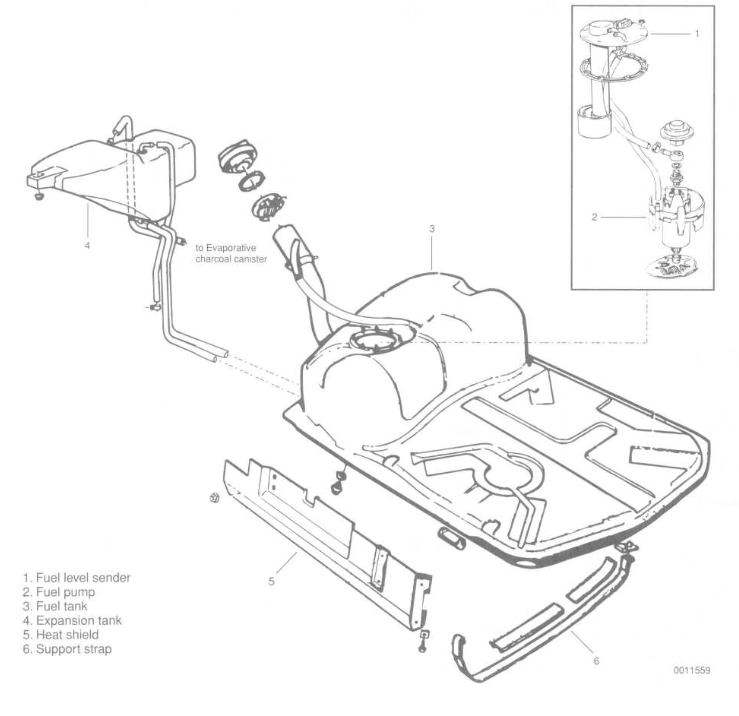